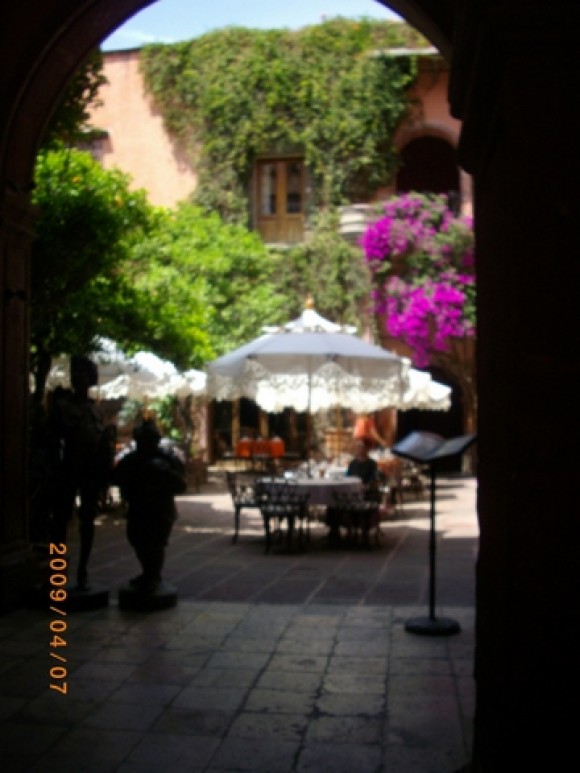 San Miguel – The City At The Speed of Flow

I’ve actually been to San Miguel two times – once for a month and then for four months. Still wasn’t enough time. People commonly come and stay, finding that the flow is where and how life should be! San Miguel is so enchanting that I’m planning a return visit for a spiritual retreat in April of 2012. This magical town is a must visit and should be on your bucket list!

San Miguel – Below is a great list of things to do & see in San Miguel:

Benito Juarez Park
Beautiful green filled park with fountains, ponds, wrought iron benches, graceful bridges and broad walkways lined with cherimoya, mulberry and walnut trees. It is a wonderful place for people watching or a relaxing stroll. It is also surrounded by some amazing buildings and is just below the beautiful Casa de Cultura (El Chorro).

El Charco del Ingenio
Botanical Garden with 250 acres of nature reserve just a few minutes from the historical center of San Miguel de Allende. El Charco hosts an extensive botanical collection made up of Mexican cacti and other plants with several miles of trails and paths. The name comes from a spring-fed pool nestled in an impressive canyon, which popular legend has interwoven with spirits and myths dating from the Spanish conquest. Declared an Ecological Preservation Zone in 2005. In addition to its primary mission of managing and developing the botanical garden and Landeta Park in San Miguel de Allende, El Charco del Ingenio AC is also responsible for a Forestry Reserve of 90 hectares in the highlands of Los Picachos, a mountain range south of the city. In 2004, The Charco del Ingenio was sanctified as a Peace Zone by the Dalai Lama, Tibetan leader and winner of the Nobel Peace Prize, during his visit to Mexico. Five Peace Zones were designated in the country, places free of violence and arms, dedicated to the conservation of nature and community development.

El Jardin
Plaza Allende is a good place to begin any tour or sightseeing, called El Jardin or “The Garden” by most people it is the main gathering and meeting place for the entire city. Also known as the zocalo in many Mexican cities, which is the main center of the city or “El Centro”. This is a great meeting place lined with several meticulously cut green laurel trees, which provide a quiet refuge for tourists and locals. The park comes complete with a garden, fountain, gazebo where musicians and meetings take place and several wrought iron park benches which make it a good place to sit back and enjoy a book or listen to tales form older San Miguel locals. Surrounding El Jardin are several restaurants, cafes, hotels and even the gothic designed church La Parroquia. At night El Jardin comes alive, hear local marimba musicians playing, Jardin can be found quite easily and it is bounded by Calle Correo on the south, Calle San Francisco to the north, Portal Allende on the west and Portal Guadalupe to the east.

Capilla de la Casa de Loreto
The Chapel of the Holy House was constructed in 1735 completely financed by Manuel Canal and his wife Hervas de Flores. The entrance has elaborate twisted columns on each side with the inscription “This is the home in which the Son of God was Conceived”. Constructed to resemble the famous Holy House in Loreto, Italy.

Iglesia de Nuestra Senora de la Salud
The Church of Our Lady of Health was built at the end of the 18th century, houses oil paintings of famous artists from that era. The splayed arch portal is one of only six in Mexico, while the tower has the oldest bell in the city. Open daily from 7am to 7pm. Located on Mesones Street, next to the Plaza Civica Ignacio Allende.

Iglesia de San Francisco
Built in 1779 and financed by donations from wealthy patrons and bull fight revenue. One of the finest example of Churrigueresque design in Guanajuato. Inside the church there are several paintings, statues, Corinthian columns and beautiful stone carvings. Outside is elaborately carved with an image of St. Francis of Assisi.

La Parroquio de San Miguel Arcangel
San Miguel de Allende is home to numerous beautiful Catholic churches with the most impressive being La Parroquia (the Parish). Church of St. Michael the Archangel towers over the Jardin (main square) built by architect Ceferino Gutierrez, inspired solely by postcards of European Gothic Cathedrals from France. Historians revel at how the indian artist had never had any training in gothic architecture. The original La Parroquia built in 1683 was much smaller. It endured various modifications that changed its appearance. In the late 1800s, much or the structure was demolished and rebuilt in its present pseudo gothic style. The pink stone facade is of neo gothic style, while the interior features neoclassical details. The original bell cast in 1732, still call parishioners to service several times a day. The crypt vault is said to house War of Independence heroes Felipe Gonzalez and General Anastasio Bustamante. La Parroquio is located on the south side of El Jardin (main square) on Calle Correo. Open daily 9am to 7pm.

Oratorio de San Felipe Neri
Built be local Indians in 1712 and made of pink stone. Adorned by a statue of Our Lady of Solitude. The Oratorio features domes in myriad shapes and the interior houses 33 oil paintings offering vignettes of the 16th century life of St. Philip Neri. Located on the corner of Insurgents and Pepe Llanos Open Saturdays 8am to 6pm.

Templo de la Conception
The locals call it “Las Monjas” (the Nuns). This 18th-century neoclassical-style construction was inspired by the Church of the Disabled in Paris. The dome at the top is one of the largest in Mexico. Inside you’ll see the works of famed artist Juan Rodriguez Juarez. Open daily 9am to 7pm. Located on La Canal and Hernandez Macias.

Instituto Allende
This is the towns most famous art and language school. Instituto Allende was founded in 1951 and was purchased from the Canal family. Spanish and art courses offered including sculpture, silver work, traditional Mexican weaving, ceramics, painting, textile design and printmaking. The grounds are surrounded with ivy and rosebushes.

Instituto Nacional de Bellas Artes
The official name is Cultural Center “El Nigromante” it is known by the locals as “Bellas Artes” (the Fine Arts). Bellas Artes is a local art institute in San Miguel de Allende, Mexico where courses surrounding, art, sculpture, music and dance can be taken. The large compound houses a museum, auditorium, two art galleries, and a cafe, Las Musas. Inside there are several large murals by the celebrated Mexican painter David Alfaro Siquieros, a former teacher. Outside enjoy a huge courtyard, shady trees and colonial fountains, making it a perfect place for inspiration and studying

La Biblioteca Publica
For more than 50 years the Biblioteca Publica (Public Library), considered one of the best bilingual libraries in Mexico, with more than 60,000 volumes in Spanish, English, German or French. Local activities such as films, theatres, lectures and classes are posted on the bulletin board near the entrance.

Casa de los Perros
Also known as The House of the Dogs. Once home to Independence War hero Juan de Mafuele, and now house a local Gallery called Galeria Mafuele. The building has interesting carvings of dogs on the balconies. It is located Umaran 4.

Casa del Mayorazgo de Canal
One of the many beautiful mansions in San Miguel, belongs to the descendants of Manuel Thomas de la Canal. Often referred to as the “the counts house” The entry way displays columns and is a good example of colonial architecture. Now occupied by Banamex Bank and located to the west of the plaza.

Plaza de Toros
Plaza de Toros Oriente is the town of San Miguel de Allende bull ring, , located off Calle Recreo, El Centro. Plaza de Toros is only open during certain times of the year, and is hidden behind a large wall, that has a red door for the entrance. Plaza de Toros draws a huge crowd during bull fights and is popular in September during La Fiesta de San Miguel. Not to miss in September is Sanmiguelada, which was inspired by Spains Pamplona running of the bulls. San Miguel is home to one of the most famous women bull fighters Hilda Tenorio also referred to as Toreras.

Mercado de Artesanias
Artist Market, where one can shop and purchase fine works of art. Local artists specialize in glass, tin, metal and other various art. This is a good place to shop for deals. The Artist Market is located in the alley between Colegio, behind Mercado Ignacio Ramirez. and Calle Loreto. Open daily from 8am to 7pm.

Dolores Hidalgo
Dolores Hidalgo in full, Dolores Hidalgo Cuna de la Independencia Nacional is a city and its surrounding municipality in the north-central part of the Mexican state of Guanajuato. Delores Hidalgo is located 31 miles from San Miguel de Allende and is a good city to visit on a side trip. Dolores Hidalgo was named a “Pueblo Mágico” in 2002. The city was a small town known simply as Dolores when Father Miguel Hidalgo uttered his famous cry for the independence of Mexico (the “Grito de Dolores”) there in the early morning hours of September 16, 1810 in front of his parish church. After Mexico achieved independence, the town was renamed “Dolores Hidalgo” in his honor. On September 28, 1810, Hidalgos forces killed more than 500 Spaniard and Creole loyalist soldiers during the battle for Dolores; 2,000 Indigenous Mexicans died in the fighting. Today Dolores Hidalgo is known primarily for its ceramics industry, which provides income to well over half the towns population. The inexpensive and mass-produced output of the town is marketed throughout Latin America and the United States. The central square of the town, in front of Father Hidalgos historic church, is a popular tourist spot.

*Above information quoted from Sanmigueldeallende.com

Hi Kristopher,
Thank you for the information! I will be bringing my boys for 2 months this summer. I have been there 2 times for only a week each time, but this will be the best! Don’t forget about taking a day trip to Guanajuato–that’s another beautiful city to explore!
Kim