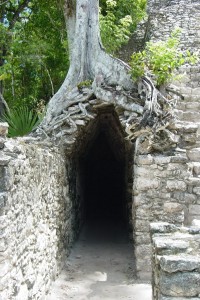 The Magical Portal at Coba

“Everything we do, everything we are, rests on our personal power. If we don’t have enough personal power the most magnificent piece of wisdom can be revealed to us and it won’t make a damn bit of difference.” Don Juan speaking to Carlos Castaneda

The importance of personal power is often misunderstood or undervalued on a spiritual path. Toltec Wisdom acknowledges this and much emphasis is placed upon ?stalking power?. It is not an exaggeration to say that much of the suffering and difficulties people have in life is directly due to a lack of personal power.

One common misperception people have is that power means that a person will harm others or be used for no good. It is true that power can corrupt when used by the ego, or what Toltecs call ?human form?. Here I am defining ego as that which promotes separateness from others and exclusiveness, instead of connectedness and inclusiveness. However, the same thing is true with many things in life. Money, for example, can be used for good, altruistic purposes, or for not so good things. Both money and power have been abused throughout history.
However, just because something can be used for both positive and negative things, you don?t want to throw the baby out with the bath water. A man or woman of power has the ability to benefit the world and other humans. A person with little power will not have the same ability. The same is true for benefiting oneself.

Human beings have the capability to manifest and create their reality, for example. Many speak of using laws like the Law of Attraction to manifest what one desires. While this law is true, without personal power one?s ability to manifest will be limited. A man or woman of power is able to create a life full of love and abundance for themselves, and their family. Many times the reason why a person suffers lack is because they lack personal power.

It is often said that a spiritual path is the most difficult thing you will ever do. Because of this it takes an incredible amount of personal power to walk it. Whether it is in your spiritual pursuits or in living a fulfilling life full of love and abundance, the more empowerment you have, the greater will your capability to achieve what you desire.

This video was shot at the sacred Mayan and Toltec pyramids of Coba in the Mayan jungles of the Yucatan.

Thank you for this article and audio. It is really helpful to me as I begin my own spiritual journey to learning more about shamanic healing practices and sometimes struggle with my own fears and limiting beliefs in the process. Thanks again.

Thank you for your kind words Liza. You have a wonderful heart and I know it will always point you in the right direction.

I was unable to open any video. May be is my browser.

I don’t know for sure.

This is one of those great secrets which everyone should know and practice, because unfortunately, many ppl learn to just avoid confrontation with challenges all their lives, and sadly miss their chances for personal freedom and abundance, as you said.
What I don’t understand is, when I extend into and through these challenges, and let’s say that their first attempt doesn’t go right, how do I cope with that initial feeling of failure? I may be hunting power, but after I try, and I mess something up, even tho I know what I did wrong and will do it right next time, how do I keep from letting my power get taken down a notch from the knowledge that I messed up?
When Carlos Castaneda had a challenge before him, and don Juan would help him thru it, the solutions which don Juan would come up to be the perfect solution would always be something strange, something that I’m afraid I wouldn’t be able to come up with.

Becoming a Man or Woman of Power – Toltec Wisdom Video at The Pyramids of Coba | News & Events - Castaneda, Millman and Redfield

How do you differentiate between power and energy?? It is not clear for me. I had the notion that power is energy and energy is power..

How exactly do you become a person of power?