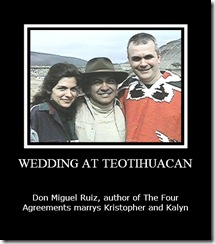 I first met don Miguel Ruiz, bestselling author of the Four Agreements and The Fifth Agreement, in the late 90?s. I had been walking the Toltec Path for some time. In 1995 I created one of the first Forums on the internet dedicated to Toltec wisdom called The Toltec Nagual.

One day I was browsing the classified ads in a local Los Angeles new age newspaper. A little ad caught my eye with the words, ?join don Miguel Ruiz, a Toltec Nagual and learn about Toltec Wisdom?. I asked my wife Kalyn if she would like to go, and off we went.

The time spent with don Miguel was always very personal and inspiring. He would visit private homes in Los Angeles and in San Diego where he lived, and talk about things Toltec. This was before he was a well known author. He was always open, warm and exuded love. During his talks he would often say, ?Don?t believe me, don?t believe anyone else, don?t believe yourself.? They were powerful words, which don Miguel has now labeled in his new book, The Fifth Agreement.

Eliminating belief systems are one of the core teachings of the Toltec Path. Whenever you have a belief, you no longer perceive what is. You see only what Toltecs call, the smoky mirror. You see the world through colored glasses. For example, in Japan they have the number four symbolizes death. The word ?shi?, which means four in Japanese sounds like the word death, ?shinu? in Japanese. Due to this belief, they eliminate the fourth floor in their buildings. Correspondingly, the number 13 is often considered unlucky in western cultures, and the 13th floor is sometimes eliminated from buildings. Depending on their beliefs, each culture perceives things differently.

Another quick example ? in the west, suicide is thought to have dire consequences in the afterlife. This is due to the prevalence of Christian beliefs about heaven and hell. In Japan, on the other hand, the Samurai considered suicide as honorable. If defeated, a warrior considered it an honor to be able to commit suicide. To this day, suicide is perceived very differently in Japan than it is in the West.

Why is this important on a spiritual path? It is important because in order to see the truth, to see reality clearly and unbiased, one must be free of belief systems. In order to grow and evolve, one must change the way they see themselves and the world. Toltecs call belief systems inventory. In order to perceive reality and beyond into what Toltecs call the second attention, the world of energy, they strive to eliminate all inventory. This is much like seeing the world through the eyes of a child, or what Buddhists call ?The Beginners Mind?.

It is easy to see how things like racial prejudice and discrimination are often based on belief systems. If one believes that a race of people are inferior, they will actually see things that validate their beliefs. They see the world through lenses colored by their beliefs.

One of Don Miguel Ruiz?s dreams is to transform the world to a better place. To do so we must first transform our personal dreams. We must become clear, free from old knowledge and beliefs that bind us. This is the power of the Fifth Agreement.

Tweets that mention The Fifth Agreement-Eliminating Beliefs as a Path to Freedom | The Toltec Mystery School - The Four Agreements, Carlos Castaneda and Beyond -- Topsy.com

[...] This post was mentioned on Twitter by Kristopher Raphael and Misty Summers, Joyce Mills. Joyce Mills said: RT: @krisraphael The Fifth Agreement – Eliminating Beliefs as a Path to Freedom and Enlightenment http://bit.ly/b0xnaU [...]

[...] By now you probably know or have heard of The Four Agreements. Are you ready for The Fifth Agreement? [...]

[...] Kalyn and I have been traveling Mexico the past month. The trip has been magical, full of many synchronicities and messages from Spirit. Arriving at our hotel in Guadalahara, our daughter wanted to watch a cartoon. I switched on the television and up popped a Mexican talk show host interviewing don Miguel Ruiz. Don Miguel is author of The Four Agreements (Los Quatro Acuardos in Spanish), and now The Fifth Agreement. [...]